Bühler - Franz Haas Waffelmaschinen, located in Lower Austria, has totally realigned the material flow between goods receiving and order picking, boosting efficiency by as much as 80 per cent. ZetesMedea Warehouse Execution System played a key role in this.

Ferrero Rocher, Kitkat, Hanuta and Manner Schnitte are just a few of the products made on machines from Bühler – Franz Haas Waffelmaschinen GmbH. At the site near Vienna, wafer products are developed and industrialised together with well-known customers.

At Bühler climate protection is not just an empty phrase. At the premises of the world market leader in Lower Austria, avoiding unnecessary CO2 emissions starts with supplier selection. When the company, a member of the Swiss Bühler Group, was looking for an IT solution to optimise warehouse processes in 2019, Zetes Austria (located just 30 kilometres away in Vienna) had a home team advantage. “We didn't want a partner that had to travel by plane for a personal get-acquainted meeting”, says Thomas Krimmer, Head of Supply Chain Management for the Wafer business unit. 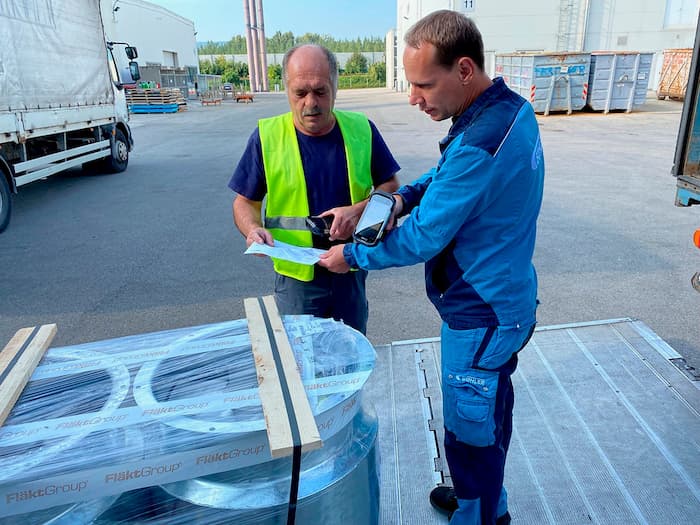 Along with proximity and the available references, ZetesMedea was the main selling point. The Warehouse Execution System (WES) developed by Zetes can control and digitise all processes between goods receiving and shipping.
Tried and tested interfaces facilitate easy integration into the existing software landscape. At Bühler, ZetesMedea is connected to the SAP ERP system and exchanges order and stock data with the ERP system. One of the key elements of the solution is mobile computers running the ZetesMedea app. They provide clear instructions to guide warehouse employees reliably and faultlessly through the processes.
Krimmer and his team wanted to fully exploit the potential of the Warehouse Execution System, so they also took a critical look at rest of the storage technology. The path analysis was disillusioning. “The paths between the goods, the warehouse office and the printers were much too long”, recalls Krimmer, who upended all the processes in the course of the project. Walls and offices were eliminated, along with stationary computers and printers.
In their place, the logistics manager had the company workshop build 17 mobile workstations, which were equipped with Zebra label printers, mobile computers and notebooks. Desks and office chairs were replaced by a team-info board and charging stations for the mobile workstations.

First the mobile carts were deployed in goods receiving and for stock transfers and order picking. Each cart has a Zebra TC72 WLAN-capable touch computer in smartphone format. These Android devices are equipped with 1D/2D scanners that deliver good results even under difficult conditions and enable a scanning range of more than 80 cm, depending on the barcode. The 13 megapixel camera and a 5 megapixel front camera can capture additional information, such as signatures and photos of damaged goods. Zetes supplied the touch computers fully configured with the ZetesMedea app.
“The employees are guided intuitively by the app, so no special training was necessary”, says Krimmer, whose warehouse staff can be deployed anywhere and everywhere since the rollout of ZetesMedea. “Previously everyone was specialised in specific tasks, such as order picking or receiving incoming goods”, notes Krimmer. Thanks to practical support by the app, employees can now fill in for each other, considerably simplifying deployment scheduling.

At Bühler, around 250 items from external suppliers and another 200 items from internal production are received every day. Shipments from relatively large suppliers usually have barcodes that are scanned by the employees. The app recognises whether the delivery is subject to inspection (forwarding to the incoming quality check) or whether the goods are backlogged and must therefore be made available for immediate onward transport to the production.

If it involves a new item for the portfolio of the online shop for the business field After Sales, it must first be sent to the company’s photo studio. The corresponding request runs in the background via the interface to SAP, and the employee receives the response directly on the display of their mobile computer. If the goods must be put into storage, the storage location assigned by SAP is also shown. Booking into inventory takes place at the same time.
The instructions from ZetesMedea are always clear and unambiguous, virtually eliminating errors. The same applies if a shipment needs to be given a new label.
In this case the Zebra ZD620t label printer mounted on the mobile cart springs into action. This printer is equipped with a battery base station to ensure uninterrupted operation during the entire shift, with communication via WLAN.

ZetesMedea handles another important function in stock transfers, which have to be carried out regularly due to the chaotic warehousing. To launch the function, the employee selects the “Transfer” option in the menu and is then guided to the first storage location, whose stock should be merged with another location. Before removal, the storage number attached to the shelf and then the individual items must be scanned. At the destination as well, the storage number must also be scanned before the process can be completed. According to Krimmer’s calculation, “ZetesMedea boosts our productivity by 80 per cent for stock transfers.” On average, the new procedure has improved efficiency by about 25 per cent across all process steps.

In a similar way, ZetesMedea supports internal transport operations and order picking of parts required in production. The pick orders generated by SAP are displayed on the mobile computers with the storage locations and quantities and are processed step by step by the order pickers. Around 900 items are picked per day. The app enables single-order and multi-order picking, with the latter typically being used for module assembly. In the picking process, the employees are supported by the picking carts and bins. 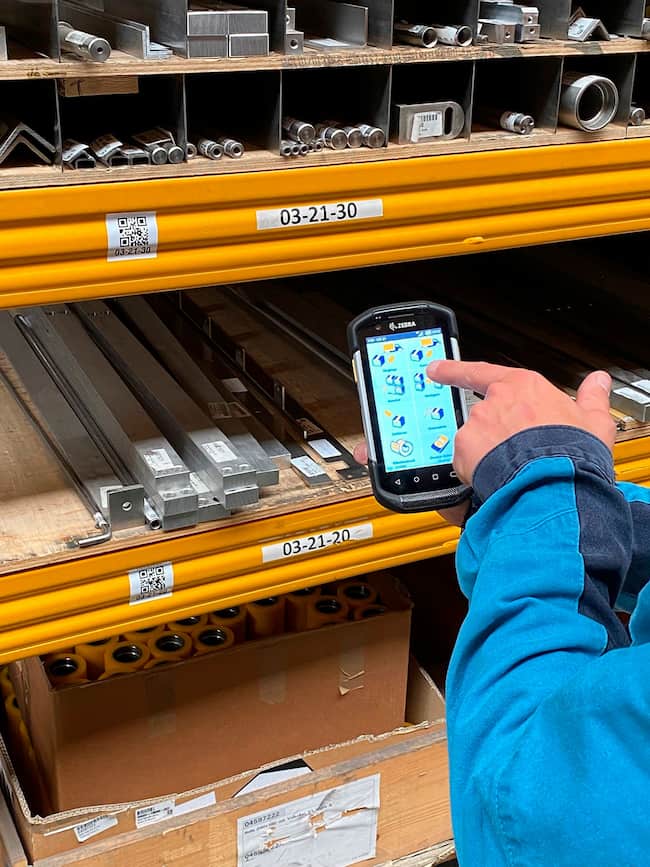 If any questions arise regarding the identification of individual items, ZetesMedea can answer them with the Material Info function. Simply scanning the barcode attached to the item is enough to present the exact product description on the display of the mobile computer. The Material Info function is needed when there are several similar items in a storage location.

Finally, the inventory function of ZetesMedea comes into play between September and December. During this period, the warehouse staff must count all the items in stock. This always involves counting the storage locations, which are anyway visited as part of a different activity. “With this rational and completely digital process, we were able to eliminate the previous full counting with paper lists”, says Krimmer, who is also very pleased with the course of the project.

The rollout of ZetesMedea went much faster than expected and was completed in just eight weeks. “I was impressed by the speed”, comments Krimmer, and adds: “The implementation was faultless through all phases of the project. I have rarely experienced a service provider that worked as well and reliably as Zetes.” The supply chain manager is just as positive about the payback: “Considering the enormous boost in productivity in goods receiving and stock transfers, the investment has paid for itself within the first months.”

Every day, 2 billion people consume food that owes its production to Bühler process technology. These include flour, rice, pasta, chocolate, coffee, and beer. Bühler is represented in over 140 countries with 100 service stations, more than 30 manufacturing sites and 25 application centres. Half of new cars worldwide have die-cast components produced with Bühler technologies. The globally positioned Swiss family-owned company is particularly committed to sustainability. We want our customers to be successful. We want everyone to have access to healthy food. We want to protect the climate through energy-efficient vehicles, buildings and machines. For more information, visit www.buhlergroup.com.

Read More
From paper to voice picking ... and beyond at Gruppo Iper