Bühler – Franz Haas Waffelmaschinen GmbH, the world market leader in waffle machines, has totally digitalised their warehouse processes at the Leobendorf headquarters location with ZetesMedea, Zetes’ Warehouse Execution System. The project, implemented in just 8 weeks, resulted in up to 80 % higher productivity and generated a quick return on investment. Critical warehouse processes, that used to be paper driven and time-consuming, are now fully digitalised with an integrated solution combining an intuitive and untrained system with the latest technology, allowing for more flexibility of the workforce.

Bühler - Franz Haas Waffelmaschinen GmbH specialises in machines for the production of confectionery and pastry products, in particular waffle products, and is the world market leader in this field. They opted for ZetesMedea, an intuitive operator guidance which doesn’t require special training due to the practical assistance provided by the app, each employee can now step in for the other, which simplifies personnel scheduling. The company operates in a global production network of the Bühler Group. At the site in Leobendorf near Vienna, production plants for wafer and biscuit products are developed and manufactured. Bühler employs 13,165 people worldwide in 140 countries.

At Bühler, ZetesMedea is connected to the SAP ERP system and exchanges order and stock data with the ERP system. Along with the Warehouse Execution System (WES), the storage technology was optimised to minimise the paths between the goods, warehouse office and printers.
Stationary computers and printers were replaced by 17 mobile workstations equipped with label printers and Zebra handheld units. The ZetesMedea app, running on the handheld units, provides clear instructions to guide warehouse staff reliably and faultlessly through the processes. Zetes supplied the hardware fully configured. 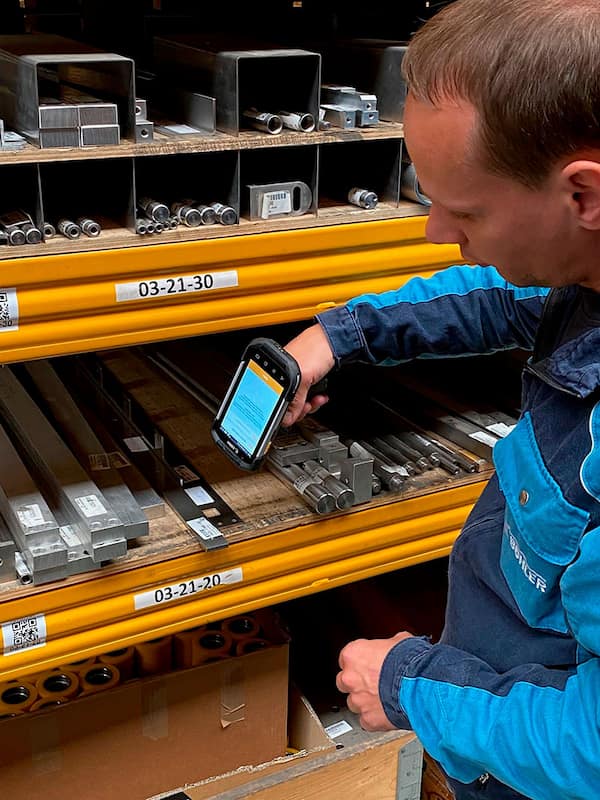 The intuitive user guidance of ZetesMedea reduces the required staff training to a minimum and the practical assistance in the app enables significantly more flexible staff scheduling - in the interest of the employees as well as the company.
Around 450 items are received daily with ZetesMedea in Bühler's goods receiving department.
WES also handles another important function for stock transfers, which are repeatedly necessary to consolidate space due to chaotic warehousing. According to the calculation of Thomas Krimmer from Bühler, “ZetesMedea boosts our productivity by 80 % for stock transfers.” On average, efficiency has increased by at least 20 % with the new procedure. This suggests that the investment in ZetesMedea has been paid back in just a few months.

Easy to deploy and manage

At Bühler, ZetesMedea also supports internal transport operations and order picking of parts required in production. The pick orders generated by SAP are displayed on the handheld units with the storage locations and quantities and are processed step by step by the order pickers.

The rollout of ZetesMedea went much faster than expected and was completed in just eight weeks. “The implementation was faultless through all phases of the project. I have rarely experienced a service provider that worked as well and reliably as Zetes”, says Thomas Krimmer, Head of Supply Chain Management of Bühler. Norbord automates labelling of hundreds of pallets per day with ZetesAtlas Zetes supporting the fightback of the illicit supply of tobacco